Seeing and hearing the Maidenhead bridges: Turner is not commemorated in drain covers.

If we can agree that a "good echo" needs about a quarter second (or more) to elapse between utterance are re-hearing, then we need to know that sound will travel a little over 281 feet in that time. Ergo, an obstacle 140 feet distant will produce, by reflection, a "good echo".

has a span of 128 feet, so we needn't be surprised that the echo is pretty good - hence its name. The bridge has an interesting history that is easy to find elsewhere, but is perhaps primarily famous for its depiction in Turner's impressionist picture Rain, Steam and Speed:
> Turner depicted the line when it was still broad gauge (obviously).

(Local spies report that a nearby bridge engineered contemporaneously has an equally good echo, but this cannot be so as its span is very much less).

Proximal to this fine bridge is an equally fine GvR wall box; and a drain cover that probably wasn't due to IKB. 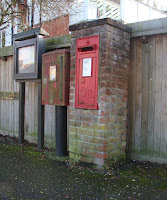 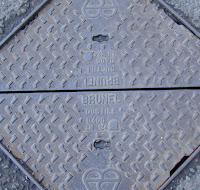 Returning to Maidenhead, there was a grand view of the Bath Road vehicle bridge and a now unusual PO bicycle, outside a sub-PO.

It's possible the bicycle has moved but the bridges are probably still there.
Posted by Roger at 04:57