A year or more ago the Get on with Science project [GOWS] in Wales initiated a project in Ysgol Bro Ddyfi in Machynlleth, aimed at connecting the IT [sic] department with its principal feeder primaries: Ysgol Gynradd Machynlleth, Ysgol Gynradd Glantwymyn, Ysgol Llanbrynmair, Ysgol Dyffryn Dulas. Part of this funded a small number of Raspberry Pi's which permitted the primaries to start, e.g., teaching Scratch. (A jolly good blogpost on GOWS in Mach can be read).

Toward the end of the GOWS funding, Computing at School secured support to provide more Pi's to each of its active Hubs; the nascent mid-Wales Hub used this allocation to further the GOWS intitiative. 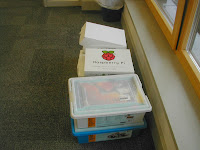 Things can move slowly in Wales ☺, not least because some of the primary (and high) schools are exceptionally small by national standards - Bro Ddyfi consistently has fewer than 350 pupils. It is easy to imagine the consequence for specialist staffing and (non-)duplication of skills. 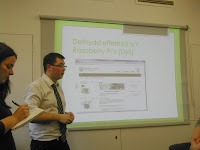 Tomi Rowlands, the highly energetic computing teacher, periodically brings the primaries together in Mach to stimulate ideas - January 24th saw one such day. A lot was done in a short time, including a demo of a HD touch screen display, things with Lego, and App Inventor, and some time with the potential of the Pi's. This was a great session as it was led by Robert Buchan Terry, a year 12 pupil who has been a Pi maniac since before they were released. 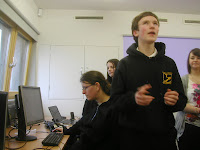 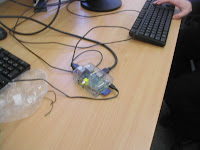 Robert spent some time getting the primary teachers (whose aggregate computing credentials were rather low!) up close and personal with some Python code, motivated by the really rather fine Squirrel game. They learned how the most rudimentary knowledge allowed them to adjust game parameters to change its appearance and behaviour - as a motivator to do and learn more this is splendid. 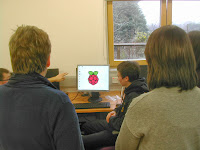 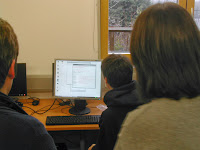 We from CAS learned two things of great benefit: at least one of the primaries was starting up an IT club which, even though the school is probably up a 5 mile unmade muddy road behind several wonky farm gates, we will aim to attend some time soon, and also that Cyngor Sir Ceredigion (Ceredigion County Council) have looked very favourably on GOWS and hope to mount something locally that is similar. This Council appointed its very first IT coordinator just 12 months ago, so this may be a terrific gap to step into.

(Footnote: All the schools are Welsh medium. The workshop was something of a mystery to some of us at times, but words like "Pi" seem to translate reasonably obviously). 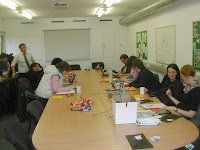 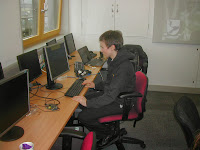