I can't dance, either

I doubt that even the band themselves would lay claim to significant musical ability, but their show was certainly spectacular. When I saw them during their 72/73 tour they were rather loud with lotsa lights and electronics and probably (no, certainly) lotsa drugs. A jolly good evening.

In a splendid documentary on the band Lemmy explains that "It was very easy to get into our band in those days ... she had an uncontrollable urge one night to take all her clothes off and paint herself blue ... ".

Diligent research reveals that Stacia is very close to me in age and attended school in Exeter, as I did. I have no recollection of her at all from those days, which is odd. I attended a boys' grammar school.

The documentary includes a clip from the immortal "Hurry on Sundown", covered by Vetiver (who can indeed play their instruments) in their 2008 release Thing of the past , which is strongly recommended.

Much of it is busied by the junior section of City of Coventry SC, who are moving at quite a pace.

As I plough up and down, I spot a man of about my age. He sits fully clothed at a lane end in an easy chair, and has over recent years eaten many pies.

Tiny water nymphs approach him at pace, performing arms-only butterfly. "HEAD DOWN. HEAD DOWN" he bawls at them. They turn to do the next 50m legs-only. "LEGS. KICK. KICK." My, how this takes me back.

[I was swimming in the "General, medium" lane - not the slow lane - and was faster than most in it.]

Some corner of a foreign field

...there's some corner of a foreign field,
That is for ever full of old ironmongery 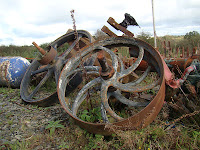 The Internal Fire Museum of Power

near Tanygroes is one of those unsung wonders of this earth. I've driven past the end of its road N times and not registered its existence, but we went on Saturday and wasn't it splendid?

They have 3 "power" days each year and we went to see one - nearly every one of their many machines is in good order so it's hard to estimate how many gallons of diesel they got through. Of course, you've got to like engines. 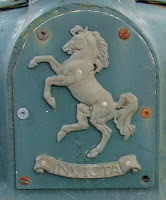 But, as is so often the case, it's the incidentals that really take your fancy. Who could fail to be entranced by a Replica of a one-legged milking stool (left), and some technical drawings (right) that have enhanced my German vocabulary no end.