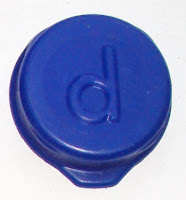 Anyone of an age will know of Smarties. Particularly the coloured (green, blue, orange, yellow) lettered caps. It's surprising to learn how many people collected them: all gone now as the letters were removed from the caps N years ago. There was, among the real enthusiasts, a protocol to this: you weren't to buy them in shops or - be serious - surreptitiously look under the caps in shops and then buy them ... they had to be finds. This usually meant gutters, floors, and other places that horrified parents (if they knew) and spouses (who rarely understand these things) really didn't like. As time went by, the grubbier and damaged instances would usually get superseded by something cleaner and better, although my four alphabet set was, after many years, completed by a yellow 'y' that was truly sordid.

Really it was the collecting alone that drove this, but making words was always an option:

Time passed. What was clearly a Good Thing was ultimately discovered by the Marketing Department and it was the only a short while before an epidemic of new colours and non-alphabetic designs - including, God forbid, spaceships - appeared: 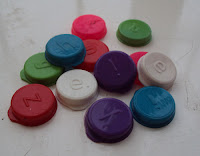 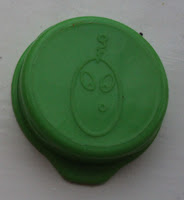 Well, the golden-egg laying goose having been sadly devalued, it was only a matter of time before it was killed. You can't get them any more. It's all a bit of a shame really, and I can't be alone in mourning the passing of a low cost and intellectually stimulating occupation. I have given my collection to my grandson, with a covering note trying to communicate its value.

Very useful in these days of over-plenty.
Posted by Roger at 08:50 No comments: