Taking the bees to Aberystwyth wasn't really anything like taking coals to Newcastle at all.

Get 3 experienced beekeepers in a row & ask them a question; they will give you three contradictory answers. The one exception was asking about taking two hives from Leeds to west Wales: "You'll be fine", I was told by all. In fact, they were right, but I lost some sleep over it.
Preparation? Fly mesh is good - they sell it at Spence's at the bottom of Wellington Road. They look at you a bit oddly if you only ask for a couple of feet since they sell it by the mile, but that was all I needed. Then I liberated some drawing pins from work and had implemented a home made travelling screen.
Moving day: I wake at an absurd time to get some serious early worrying done. My noble friend Tracy couldn't be dissuaded from helping me load: I offered him protective gear but he preferred to dress as a Leeds 6 hoodie. He showed no fear as we loaded them into the back of the transit (Oh yes, too late had we spotted ventilation from the van into the cab: Heath Robinson appeared with a copy of the Leeds Weekly News and some gaffer tape). Katey Slater appeared mid-operation to give much needed moral support ("You're not putting them in there are you?").
Fate intervenes: at this precise moment, LCC send two operatives to flush a colony out of a neighbour's chimney (no no, not a swarm of mine or Katey's - honest Guv). Is this an omen?
We embark. My good friend Peter is riding shotgun on the understanding that he does not have to have anything to do with bees. He is solicitous of my mental health and tells endless funny stories to take my mind off the fact that fear is making me drive like the most cautious of pensioners (5 hats). Aberystwyth is a very long way at 35mph.

We reach Manchester Services. On advice, I have brought some sugar water spray. "Peter, just keep an eye out while I check them, will you?". We have parked remotely from civilisation and I am pleased to open the van and not be overwhelmed by bees. However, on top of hive #1 is a solitary bee: she looks at me and says "Shall I go and get the others?"

Head down, drive to Oswestry. Call over shoulder "We're in Wales, girls - nearly there now" (but they know I am lying). Pull over at the Thrill and Grill truck stop (they won't mind) to repeat the spray protocol. There are now two bees looking at me from the top of the mesh: what would you do? Cup of tea, doorstep ham sandwich, back in the van.
We actually pulled up in Rhoshendre 5 hours after starting. The Königin of the Aber BKA had most kindly provided two stands, and the Frau enthusiastically helped me unload - "Should I put my suit on?" she asks. "I'm going to", I reply.
It was deplorably easy, actually. Took away the entrance block and then was the air full of bees. "Eyup Gladys - where's he brought us?". Or "Eyup Blodwyn - ble mae'n dod â ni?", as the Welsh have it.
So that's it: beekeeping novice to seasoned international traveller in under two years. Big thanks to the LBKA for getting me started, being endlessly helpful, and always having a rich variety of answers to my questions, many of which worked.
They're getting on great. "Gwenyn yn hapus", as I said to the Frau. 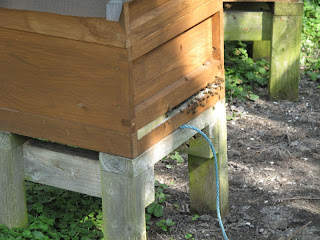 We went on a nice walk to Bishopthorpe, that afforded two really nice under-road bridge views. 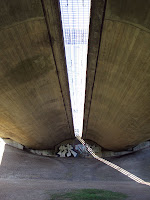 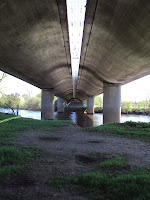 There was a welcoming notice as well