Much has been written about the Kentish Sound Mirrors, and many pictures can be seen.  There seems little need to add to these piles.

The mirrors are a compelling sight: they are big - some huge - and rather forlorn. While we know they were demonstrated to "work", they raise far more questions than they answer.

We went to see the survivor above Hythe, now in a bit of a sorry state.  It was best approached across a very muddy field, and it was a cold and windy winter day.  It seemed a good plan to have a toddler and a lady on crutches in the party.

It really was jolly interesting. 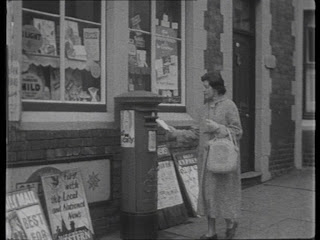 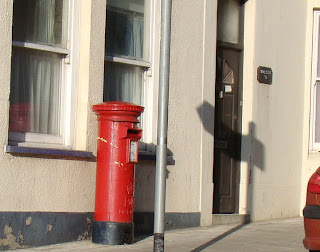 Approximately every 2 (two) hours, Arriva Trains Wales provide a train out of Aberystwyth. Well, they try. Each train consists of 2 (two) coaches.

A highlight of the Aber Christmas season is the last day of term, on which some 9000 students attempt to leave town, 8999 of them by train. 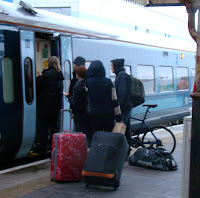 I went to watch the 3.30 departure. Unlike last year, nobody was left on the platform which was slightly disappointing, but the pictures illustrate the scene some time after the train was scheduled to leave. In the second, a lady with too many suitcases (2), and a man with too many bicycles (1) are evident.

The picture is unable to record the Train Manager yelling "JUST GET ON THE TRAIN, SIR" in an effort to leave West Wales.
Posted by Roger at 09:17 No comments: