Directly outside our house is a pair of bus stops. Buses are every 20 minutes and are the town circular: number 1 goes clockwise, number 2 anticlockwise.


On the front of both, the destination board reads Gwasanaeth y Dref, which doesn’t mean "This bus has escaped from the 1950s. No, we don’t have any change but the nice man in the queue behind you will pay and you can reimburse him when you meet him later."


From my window I have an excellent view of stops going in both directions and can take very good photos of the people waiting to go into town in either direction. It seems a bit much to publish them, but thus far I have

If you would like to see any of these, ask me directly and I will send a copy. Alternatively, I will take requests and match them as best I can.
Posted by Roger at 10:20 No comments:

On the top floor of the House of Fraser in Guildford, that lies between High Street and North Street, is a grand roof garden. This was built and opened in 1957-58, when this was Harvey's of Guildford. 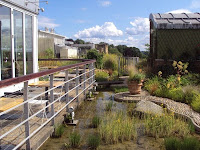 The garden was designed by Sir Geoffrey Jellicoe, a noted landscape and garden designer responsible for many public commissions (including the Kennedy memorial at Runnymede). It was requested in the wake of the Soviet 1957 Sputnik triumph; Jellicoe said it was ...primarily a sky garden,... the underlying idea has been to unite heaven and earth; the sensation is one of being poised between the two.

At the time it was a revolutionary installation and attracted a great deal of attention. It afforded magnificent views of Guildford and the North Downs. The garden eventually fell into neglect and disrepair, but was recently rediscovered and refurbished: it now includes a view of Guildford Cathedral, which had not been built at the time of its opening.

I lived in Guildford until 1959 when I was 4: I have very few memories of the town but the Jellicoe Garden is one of them – I visited it shortly after its opening in 1958. At the time my father was the Harvey’s haberdasher; he would regale us with stories about the commanding figure of Denis Pink, then Harvey’s MD. Encountering two young men taunting the fish in the garden’s extensive water features, he adroitly kicked one of them into the deep, saying, “Sir, I am so sorry for my clumsiness.” No complaint was brought.