Bar-room chat with Armando and Pierre very naturally turned to the Isle of Man moon-shot plans. 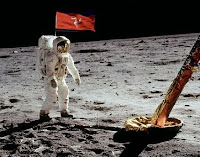 Having in the past authored a documentary piece mistaken by some as spoof or fiction, I saw an immediate opportunity to create an entertaining scam. But truth, as ever, is stranger than fiction, and it seems that the Isle of Man does indeed have a place near the front of the moon-shot peloton. The island state is variously listed as fourth (Hyperbola Flightglobal blog) or fifth (Daily Mail) most likely nation to mount the next personed lunar expedition.

It seems that the combination of the tax regime (well-known) and the Island's active encouragement of space industry (less well-known - to me anyway) combine to give Excalibur Almaz real plausibility of returning humans to the moon. The firm will use ex-Soviet former space stations; details are available.

Geeks are referred to the aforementioned Hyperbola blog, where technicalities are discussed in a measure of depth - I did like their observation Big rockets, complex spacecraft, and (lots of) money needed for manned lunar return. I think I had guessed that already.

Notable quotations on this hot topic:

(I understand the Sark cold-fusion project has stalled).
5EDR29Z3HCJT
Posted by Roger at 02:58 No comments:

A visit to Google will yield many reviews of Scott Walker's "Bish Bosch". Some representative comments are: To be fair, here are a couple of the rather fewer positive [sic] comments: Well, I've listened to it twice now.

I suspect some of these reviewers have not heard some other things I possess since they might then find Bish Bosch disappointingly melodic. While it may not be the thing I would play when Mother-in-law's at home, it's certainly a possession of note. Ah, that voice.