The David Icke Songbook is, I believe, mercifully empty, but you should have seen Myk's reaction when I mentioned it.

On the other hand, Pagan Wanderer Lu's anthem to The Glen is surely one of the more powerful pieces of music ever recorded.

This wonderful piece is available as the unadvertised 9th "bonus" track of his album The Aberystwyth Cliff Railway Disaster 1902. (There was, of course, no such event -- it happened in 1911.)

What a hard time

Whilst exploring Aberystwyth cemetery for further evidence surrounding Crook Frightfulness I happened across three teeth in a row.

They are formulaic: In memory of name son/daughter of William Lloyd and Elizabeth Warrington who died date aged years/months; then followed by a Welsh inscription.

There is a small church at Tudeley near Tonbridge in which some very striking stained glass by Marc Chagall is on view. It's fairly well known and well documented elsewhere

So it was interesting during a recent trip to the land of Chips 'n' Chocolate [Belgium] to visit St Donaas' church in Zeebrugge and see again some fairly good and recent glass, dominant in blue. (Zeebrugge, incidentally, has a population of only 6 or so; St Donaas' is a good mariners' church, complete with boat on altar).

It's not well-known, or documented elsewhere (that I can find), so I wrote to the Pastoor to enquire. He promptly replied with two pieces of illustrative information [in English]

So good for Bamford and Finch, I say.

Meanwhile, I'd be pleased to learn more about the Zeebrugge glass, if anyone knows.

Out of interest, Aberystwyth has some good glass in both St Michael's:

A trip to Surrey; some things came to light
Posted by Roger at 08:52 No comments:

I wrote with conceit about a year ago about our PV cells. It is now two years since their installation and the pictures they generate begin to stabilise.

(recall that "usage" is not a clearly defined quantity).

The best fit sine waves to generation and usage, plotted on the graphs, are (click to enlarge):

Out of interest, remember especially that June 2012 was awful, and July 2013 was pretty good - here are the pictures for those months against the best fit - no prizes for guessing which is which:

Well, the upfront money-in-pocket from the FIT is now over £5/day. What we save from using free rather than costed power, and pushing surplus into the grid, is as ever secondary and difficult to pinpoint, but is certainly another positive quantity.

We're not regretting this purchase.

Ca Plane Pour Moi, the iconic Plastic Bertrand song. People have more chance of remembering their first hearing of this than where they were on 11/9/01, or when Kennedy was shot.

In a moment of idleness, I set about capturing a list of covers with youtube or similar links. Mercifully, early on in this pointless exercise I discovered a shrine to this immortal song. Whoever did this work has done a more than thorough job. Go see.

(Apropos of Elton Mortello's version, he must have known of Jet Boy by the NYD, which I saw performed live in York in, ummm, 1974.)

My French is appalling, but I also commend David Gibb's attempted translation of the lyrics - My cat Splash indeed. An Aussie chat show has these lyrics overlaid on the PB original.

One might have assumed that linguistic Darwinism would have assured that all words relating to beer and its purchase would be unambiguous and easily understood by all: I favour calling it "beer" everywhere.

(The Polish for cuckoo is kukułka.) 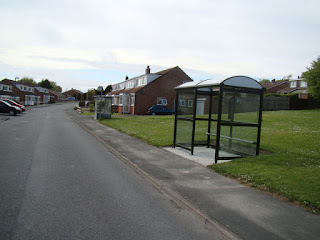 I have in the past had cause to remark on the bus-stops of Aberystwyth:

Now - to my surprise and delight, the rarest of events just outside my own house! Over a period of months, the authorities [sic] have erected a fine new stop some 25 yards east of the previous; nobody is sure why. Endless hours of fun are to be had watching putative customers deciding which one actually works - the same confusion afflicts the bus drivers.

We know of no plans ro remove the "old" one. 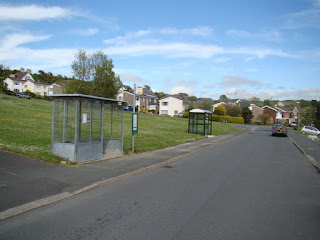 The best pub in Llandudno

We travel to Llandudno, a town of over-high buildings where the model aeroplane enthusiasts dress their craft as seagulls and rare cable-hauled trams run amok in the streets.

Those habitual liars Trip Advisor tell you the best pub in town is a place I will not name, to avoid risk of libeling. With minimal effort we found two contenders in The Cottage Loaf and The Albert - who knows how many more and better there may actually be?

They also undersing one of the country's most exceptional ancient monuments where you can see blissfully happy people excavating malachite, to impede the parking of cars.

A wonderful month for number theorists: the Weak Goldbach Conjecture is proved [Helfgott], and an enormous inroad is made to the Twin Prime Conjecture [Zhang]. Neither advance owes anything to me.

Kevin then posed an interesting question: is the Fields Medal awarded in the year of the work that merits it? If so, wouldn't you be pissed off to make an advance of huge stature to be pipped by someone else?

I'll delay my publication of a proof of the Riemann Hypothesis until next year, just in case. 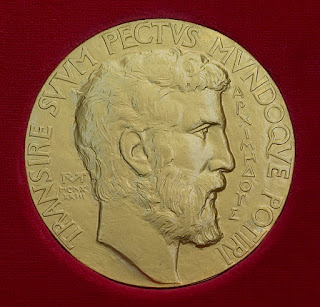 More productively, we thought about manufacturing a facsimile of a Fields Medal using the underused 3D printer in Gwyddoniaeth Gyfrifiadurol at Prifysgol Aberystwyth and taking it turns to wear it during excursions to the pubs of Aber.

Kevin, incidentally, is runner-up in the World Outdoor Cribbage Championship.

In some parts of the world, care is taken to ensure that places closely associated with less popular ex-leaders do not evolve into shrines attended by the misguided.

Is it true that Grantham is to be demolished?

On the BBC this morning, Greg Mulholland MP said (I paraphrase), "Roger Boyle needs to account for his actions".

He meant the other one.

I think. For the record, he is "Professor Sir Roger Boyle", while I am "Visiting Professor Boyle", an eternal disappointment to my sisters. If this baffles you, compare the issue with the hierarchy of Admirals.

(I'm fairly sure Mulholland wasn't referring to the other other one, or indeed his son, also blessed with my name.)

Refugees and the Ace Cafe

There is a route from mid-Kent to West Wales that takes in Liverpool Street station and Stonebridge Park. While not the most direct, it affords two sightseeing opportunities. 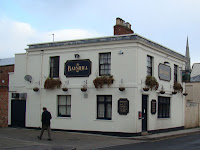 On age, perfection, semi-primality and being 142

Some years ago, the Frau was 28 years old: one day she became 29 and I cockily wrote in her birthday greeting "No longer perfect, but irreducible", and since that date have paid close attention to the primality or otherwise of our respective ages.

She was pleased and impressed when I noted that both before and after our recent birthdays (many thanks for your cards and gifts), both our ages were semiprime: which is to say all four numbers have precisely 2 prime factors (but you knew that already).

Which leads to the obvious questions:

It took some web-searching to determine that an answer to the first question is
x log log x / log x
- a result I was unable to prove myself that is predictably due to Landau, although this is reported as a poor approximation, and better, less quotable, asymptotic formulae exist.

There does not seem to be a clear answer to the second question, which it need not surprise us pre-occupied the ubiquitous Paul Erdös (did I mention I once beat him at chess?). A simple computer program suggests there are many consecutives, and indeed triples (clearly, 4 in a row is no-go). Heath-Brown has shown there is an infinite number of such pairs [1] but I am unsure of their density.

Anyway, if I live to be 141-142, the pair of us can enjoy this happy numerological event again.