Anna Meredith (Get It Loud In Libraries), via Bevington Street

To Liverpool, to see Anna Meredith, with Spike. I struggle and fail to think of a weirder gig I have been to.

Ms Meredith appeared punctually with her band. These were Man 1 (tuba and classroom glockenspiel), Man 2 [hatted] (percussion), Man 3 (guitar, wow!) and Lady 2 (cello, wow! bis). Ms Meredith played keyboard [sic], clarinet, classroom glockenspiel and snare drums. There were also 2 Apple computers that seemed to be important to the overall effect. Ms Meredith often played her snares very loudly, often choosing moments when the Hatted Man was also choosing to play loud - we liked this. There is a poorly captured video of one of these instants. Passim there was animated back projection illustrating the themes of Varmints. My photographic record of this failed utterly, so just take my word that it was marvellous.

The attendance was about 45, including guest list, which either tells you that they're a bunch of philistines on Merseyside, or that I am, for once, well ahead of the curve. Being shy, retiring types we hugged the back wall until, having played Nautilus, Ms Meredith instructed us all to come to the stage. We obeyed (but most of us were less responsive to her instructions to dance). Ergo, Spike and I stood about 1m from her, and had we blown kisses at either the drummer or cellist, they would have noticed immediately (we didn't). I took lots of photos; mercifully, most of them were crap but here is a not unflattering one of Ms Meredith: 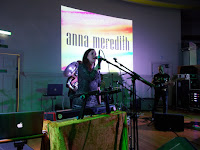 When the tuba player came onstage, he was carrying what looked like a binbag which he proceed to put on - it then turned out to be a very hip garment. During the cellist's solo he sat upstage right and I captured this picture which makes that clear (I think). 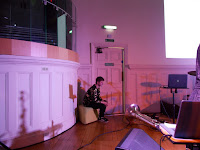 This picture also illustrates the shadow effects at stage back, exploited fully by the happy fat dancer we met, and by me rather less successfully in another short video (best seen sans audio).

These people were consummate musicians who played with a production quality very rarely heard live (although KC manage it). Both guitarist and cellist had at least 13 fingers (each) since there is no other way they could play with that complexity that fast. The drummer's skill with very quiet bits matched his skills with loud bits, the use of a tuba instead of a bass was inspired, and Ms Meredith's compositional skills with those complex interlocking rhythms leaves me unable meaningfully to compare her to anyone else.

The gig was part of Get It Loud In Libraries which is an absolutely inspired concept. So if the gig wasn't striking enough already, we were in a library.

Earlier, we had travelled to view the near derelict Bevington Street council housing, of which more anon.