Kevin was very disparaging about Hemel Hempstead, but he had overlooked two things: Hemel [sic] as a name is probably Anglo-Saxon in origin, but Domesday has it as Hemel-Amstede.

Spike and I attended Aylesbury as Mr Fripp had chosen to repeat last year's success with two more gigs - the only ones in the UK for 2016. For a review of the gig, you can usefully just read last year's, but of special note this year:

Still no Cat Food or Ladies of the Road (maybe next year?), but I did find a surprise Burton! 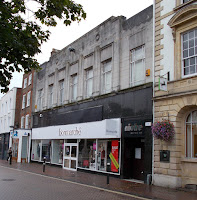 From Luton to Duibhlind, Ériu, to conduct one of my periodic labours for the Irish Research Council. There are several Burton buildings in Dublin, and known examples in Waterford and Cork. Dublin also has an interesting factory built for Burton but never used, now sporting the Mercedes Benz crest. It's right next to the tramway!