As you will know, Aberystwyth is surprisingly well provided in unusual and interesting architecture and street furniture. Notably, the number of surviving coal-hole lids is high: as soon as I am released from the wage-labour that is the National Plant Phenomics Centre I shall be conducting a survey of them.

A recent reunion trip with Patrick and John took me to Llundain, a rather run-down capital city of one of Europe's [slowly] developing nations, and it was a surprise to discover that there too, there were street views of interest. A number of coal lids can be found between Tavistock Square and Kings Cross:

Kings Cross was interesting - just imagine something with the functionality of Aberystwyth railway station, but without any of the creature comforts or facilities that the Welsh terminus has to offer. We were amused to note that the resited Platform 9.75 was so popular that it had an official queue and was staffed by a specially trained human being.

Yn ddiweddarach, ymwelais i â'r wyrion, who were in fine fettle. Visiting the site of the 2017 nuptials, we saw LBSG 1016815 (a lovely 2087/2), and a very fine wartime relic (arguably more attractive than the chosen tithe barn, but perhaps not everyone would agree on this).

In other news, more than half of those who could be arsed to vote turned out to be dumbfoundingly stupid; unbelievably this was also true in yr hen wlad fy nhadau. (Roedd Ceredigion gan amlaf yn synhwyrol). Merthyr and other Valley areas were already adrift of most deprivation leagues, but you ain't seen nothing yet! 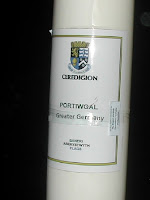