The sea bathing of the elephants at Aberystwyth of 5th July 1911 is well known: Salt and Sauce were taken by their keeper from Bostock and Wombell's Menagerie, which was visiting the town, for a bath, and photographed by Arthur Lewis.

The famous 5th July 1911 scene in which Salt and Sauce join
the Aberystwyth bathers. Photographed by Arthur Lewis.

Less well known is the catastrophic aftermath: the keeper - revelling in public attention - chose to walk the elephants up Constitution Hill to the popular tourist attractions at the top. The path is steep, and crosses the equally popular Aberystwyth Cliff Railway (visible in the photograph). The railway opened in 1896 (being electrified in 1921) on a water balance system and had operated without incident.

The precise chain of events remains unclear, but it appears one of the animals was badly spooked by the sight of the descending car and blundered through fencing (which gave way easily) onto the track, colliding with the ascending car. The force of the collision unbalanced the car which fell on its side: the descending car was brought to an immediate halt but the connecting cable remained intact. 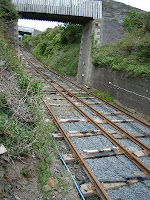 The scene today of the disaster.
The elephant entered at the left.

The damage to the ascending car and its occupants was considerable: two people and a small dog belonging to a woman named Pugh lost their lives at the scene and many injured were carried the laborious journey to the recently opened Waterloo Hydro Hotel. At least two later deaths among these were attributable to the incident.

It is not known which of the elephants was the victim/culprit: it sustained lacerations and bruising but it is believed to have recovered.

While the accident is of note for its seriousness and unusual cause (the only known instance of an elephant causing a funicular mishap), of equal interest 100 years later is the cover-up that followed. Aberystwyth was being marketed as the Biarritz of Wales; furthermore, King George V was scheduled to lay the foundation stone of the new National Library of Wales later in the month. The authorities were desperate not to attract negative publicity and sought to prevent any coverage of the incident. They were abetted in this by the happy chance that HRH Princess Alexander of Teck (later Princess Alice, Countess of Athlone) was in the descending car. Shaken but uninjured, the 28 year old mother of two was keen to conceal her presence in the town as plentiful circumstantial evidence suggests she was midway through a torrid affair with a local apprentice baker, Dewi Gryffydd, and wanted nobody to know of her presence.

Times being what they were, it was straightforward for the combined forces of the Princess's office and the local authority to suppress all press coverage. The Cambrian News and Welsh Gazette carried nothing on the incident - not even the famous bathing. Their columns were dominated by plans for the forthcoming royal visit, and the present deplorable state of Penparke [sic] which was brought before the Council with disgusting plainness.

For many years afterwards the town population knew better than to mention the matter in public. The principle of secrecy for the common good ensured that within two generations the incident was almost completely forgotten. A tourist from Remscheid near Wuppertal did discuss the matter on his return home and it was reported in the Crefelder Zeitung. The Princess's German influence was enough to get this excised. The Wuppertal connection is ironic, given the elephant-related monorail event of Wuppertal in 1950.

The 1950 Wuppertal "Tuffi" incident, in which
an elephant leapt from the monorail into the river.

What must have seemed a generous payoff to the Gryffydd family (whose descendants still run Y Popty on Terrace Road) ensured that Dewi said nothing. The incident could indeed be completely forgotten if Dewi's brother Alun had not written an account in semi-literate Welsh, complete with sketch of the scene. This account is held in the National Library, still under a level of security that prevents access to all but the most privileged of readers. Alun was later killed on the Somme and no other authoritative account is known, although it is argued by some that Mark Storey's poem The Elephants at Aberystwyth is a veiled reference.

The Elephants at Aberystwyth

Published as part of a collection: The Elephants at Aberystwyth, M Storey, Flemish Old Masters Press, 2007.

When the train gets there,
The track is choked with weeds:
This is the end of the line.
In January, whole days go by
When nothing can be seen,
When the horizon disappears,
And you could walk on water
Without knowing anything about it;
There is little telling whether
The hills go up or down,
And all the signs talk double-Dutch.
You only know there are people about
By bumping into them, but even that
Happens only now and then.
There is no such thing as sound.
No-one remembers that Bartok
Played here once, in 1922).
The locals dream of summer,
When they might take a stroll
Along the sea-front, watching out
For cormorants, or pointing to
The funicular that climbs the cliff
At the far end, reminding everyone
of what this place was like, when, they say,
(And there are postcards to prove it),
Elephants used to bathe in the sea,
After crossing the Alps with Hannibal,
Before getting lost in the mists, and
Half-wishing they were back in Carthage,
Where everything, on the whole,
Seemed so much more propitious.

The story of Lise Meitner is pretty well known: the physicist who has the primary claim on the identification of the principle of nuclear fission, whose male co-worker Otto Hahn got the Nobel prize for it. Meitner and Hahn had earlier isolated the element Proactinium (91), and in later life she did an enormous amount to support female scientists. Ruth Sime has written a very good biography.

It's no secret that she is buried in Bramley, Hampshire. If you go looking for the grave, you'll find it in the plot behind the churchyard proper, halfway down on the right beside the footpath. The stone is getting hard to read, but records Lise Meitner, 1878-1968, A physicist who never lost her humanity.

The citizens of Bramley must be proud of her, as a residential street on the north of the village is named after her. Be sure to visit Meitner Close.

Meitnerium (Mt, 109) is named after her - perhaps a better memorial all round?

But I got to inspect Preston Bus Station and its associated car park at length. Much has been written about this fabulous and threatened building: There are more pictures of this thing on the web than anyone needs, so I won't add unnecessarily to the load. But for me, the highlight was the long deserted taxi rank at the end. Will you just look at those lovely curves?