John Roberts, Telynor Cymru was born 200 years ago and there was a celebration at Gregynog.

The fun kicked off in St David's (now de-consecrated) cemetery where he is buried. Robin Huw Bowen and Meinir Olwen (who came especially from France) appeared with two triple harps: affairs were supervised by an agreeable Rector 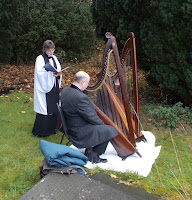 and there were many of Roberts' descendants in attendance, of whom Peter Ingram gave an address. The Rector spoke mostly in Welsh, and Ingram mostly in Romany, so I nodded knowledgeably throughout and felt very cosmopolitan.

There were umpteen events at Gregynog: I went to Ingram's hour of stand-up gypsy comedy that was very jolly, culminating in a performance by a real Patagonian guitarist/singer, who looked Spanish and sang in Welsh. Or it might have been Spalsh. Or Wanish.

Highlight was the evening concert with five [count them] triple harps, abetted by flute, fiddle and double bass. Bowen told us lots about the instrument (Telyn deires yn cymreig), its history and Roberts' connections and importance. He noted its beautiful curves and observed that the pedal ["English"] harp looked like a broken down old nag in comparison. They also fetched out Roberts' own harp from Llandrindod museum, which I have now heard played!

Next day the rain abated and I walked down to Caersws for the train: en route, this rather forgotten memorial to dead young men appeared: