To Llundain, to see in the new year, inter alia.

Thursday 29th was an outing to Fulham to play in the EBU Year End Open Pairs event. Partner was the ever understanding Jerry F, who tolerated a number of schoolgirl errors on my part to allow us 49% in the morning sesion and 47% in the afternoon. I count this as a triumph and know we'd beat 50 in another outing. Jerry, if he as as wise as I suspect, probably wouldn't permit another outing to occur: here is a picture of Jerry in motion, warming up for the day, and the record of how it went.

Friday 30th, to Holborn for the latest of a sequence of beery chats with P and J. Whether the world will actually improve as a result of our analyses of its problems is unlikely, and perhaps the world didn't even know we were there. We last attempted this in 2018, so perhaps of most interest is the before-Covid/after-Covid comparison. Can you tell which is which? 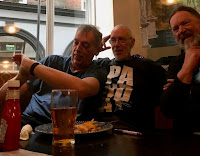 Saturday 31st, to Ashford and around for a Porkrun, and to make the Yuletide visit that was kiboshed by a mysterious esophegeal complaint. Urban highlights were an elegant OOU Post Office,and the partially restored Burton, now a splendid Polish cafe: 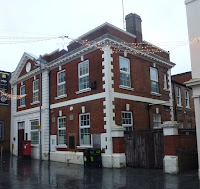 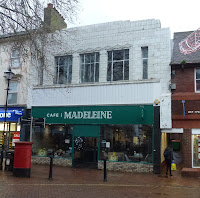 And a very jolly visit to the Enkelkinder

Blywyddyn Newydd Dda - let it be better than its predecessor. At the very least, let's not break any ribs.
Posted by Roger at 00:26